emails will never be shared. a.k.a. Natalia Paruz, has spent two decades bringing the rare art form of playing music on a carpenter’s saw (known as the musical saw or singing saw) to audiences around the world.

Saw Lady's television appearances include playing the musical saw on FOX (Good Day New York), ABC (Good Morning America), NBC (New York Live), MTV (Andy Milonakis Show), VH1 (Behind the Music), History Channel (Tool Box), PBS (New York Voices). She is the record holder for playing in the most number of 'World News Polkas' on ABC World News.
Film appearances include ‘Dummy‘ with Adrian Brody and The Heart is a Drum Machine. Saw Lady’s Musical saw can be heard on the soundtracks of films such as Time Out of Mind with Richard Gere, Fox Searchlight’s Another Earth, American Carny, I Sell the Dead, Miss Stevens, When Jack Went Glamping with David Arquette, El Carnaval Sodoma/Arthuro Ripstein and the HBO series The Jinx: The Life and Deaths of Robert Durst.
Radio performances include NPR (A Prairie Home Companion), WNYC, XM Satelite Radio, WBAI & WFMU.

Saw Lady has recorded the musical saw on Capitol Records, Universal Records and Atlantic Records with such artists as John Hiat. 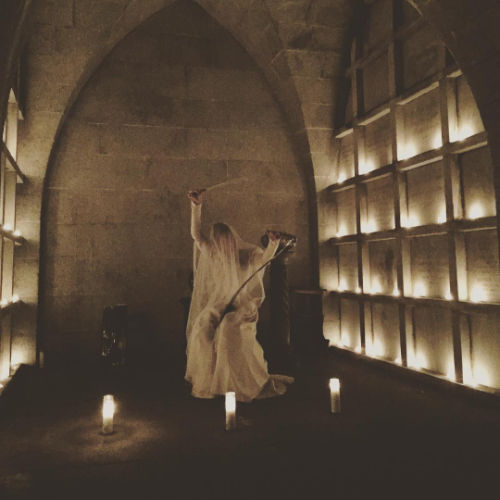 What The Press Said

“Natalia Paruz was the soloist in both works…Ms. Paruz played the work energetically and… It was difficult to imagine the music played better.”

“The eerily beautiful sounds cascade and twist through the air, sounding like the precise halfway point between the music of the spheres and a human sob.”

“…musician Natalia Paruz, who is a master of the instrument… excels at the tenor, baritone and French musical saws as well as at playing 36 pitched Austrian cowbells… Paul Lustig Dunkel, conductor and music director of the Westchester Philharmonic, said …”She was great!”

“Natalia Paruz is among the few so blessed…summoning haunting music from quivering steel. The saw trembles, as if in awe of a fortunate woman doing what she was meant to do.” Time Out Of Mind (IFC)